This Is What Happens When You Meet Your Fitness Idol 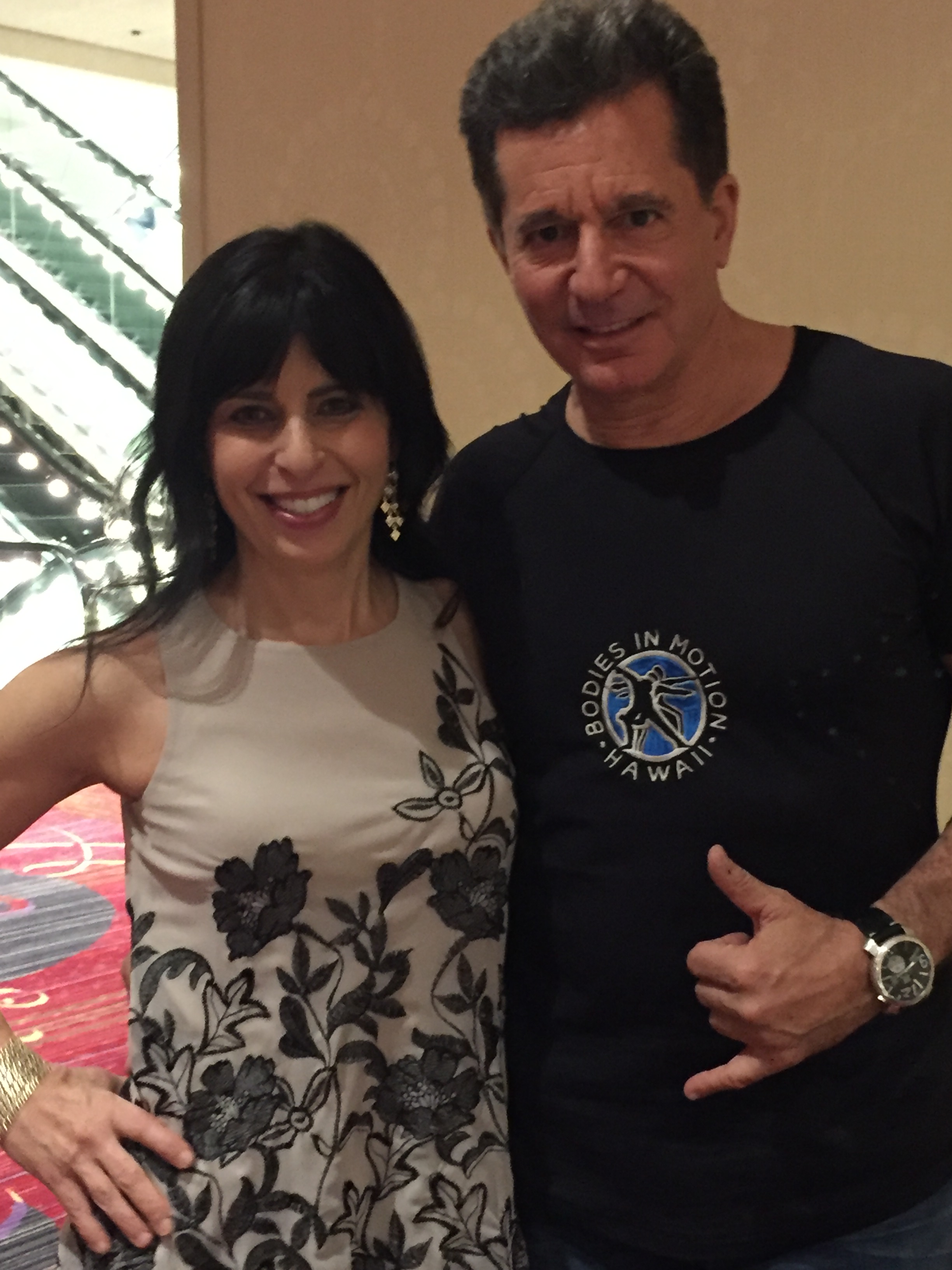 Gilad and Charlene at the ECA360 Fitness Conference

I like to think that my first step into a fitter lifestyle is along the lines of Newton’s law of motion where, “An object at rest stays at rest and an object in motion stays in motion with the same speed and in the same direction, unless acted upon by an unbalanced force.”  Now, I’m not sure if that “unbalanced force” was the unsympathetic day spa receptionist who made me so uncomfortable when I had to ask for a larger robe because the “one size fits all” label wasn’t accurate, but that incident seems to be the driving force that prompted my efforts to lose 96 lbs.  It seems fitting, then, that my first exposure to home workout videos was with Gilad’s Bodies in Motion.

I remember not wanting to attempt my initial workouts at the gym, and after scouring the Collage Video’s Guide to Exercise Videos Catalog, something about the title and the description of Gilad’s workouts called to me.  Once I received my first set of workouts, I found Gilad to be truly charming and, when he would say things like, “Get up off the couch and workout with me” or “You’re not going to get better by standing there” in that delightful accent, how could anyone refuse?  The fact that the workouts are set on the beaches of Hawaii with klutz-proof choreography was the icing on the cake. (You must know, though, I wasn’t eating the cake or the icing at this point, right?)  The workouts themselves are designed to be quick and easy to follow and, because Gilad and the Bodies in Motion team are performing the workouts on a small, black mat on the beach, the exercises are designed for a small footprint in your home as well. 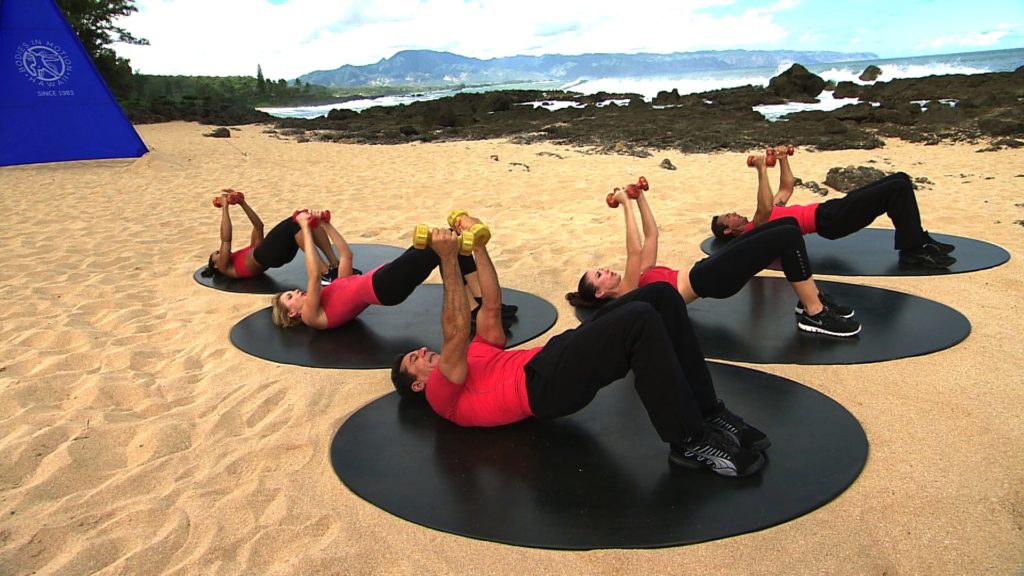 Gilad & The Bodies in Motion Team

When I achieved my goal weight, a friend suggested that I send my “before and after” photos in as a success story.  At first I laughed, but she eventually convinced me to submit them and I was featured on both Gilad’s Bodies in Motion website and in Collage Videos catalog. 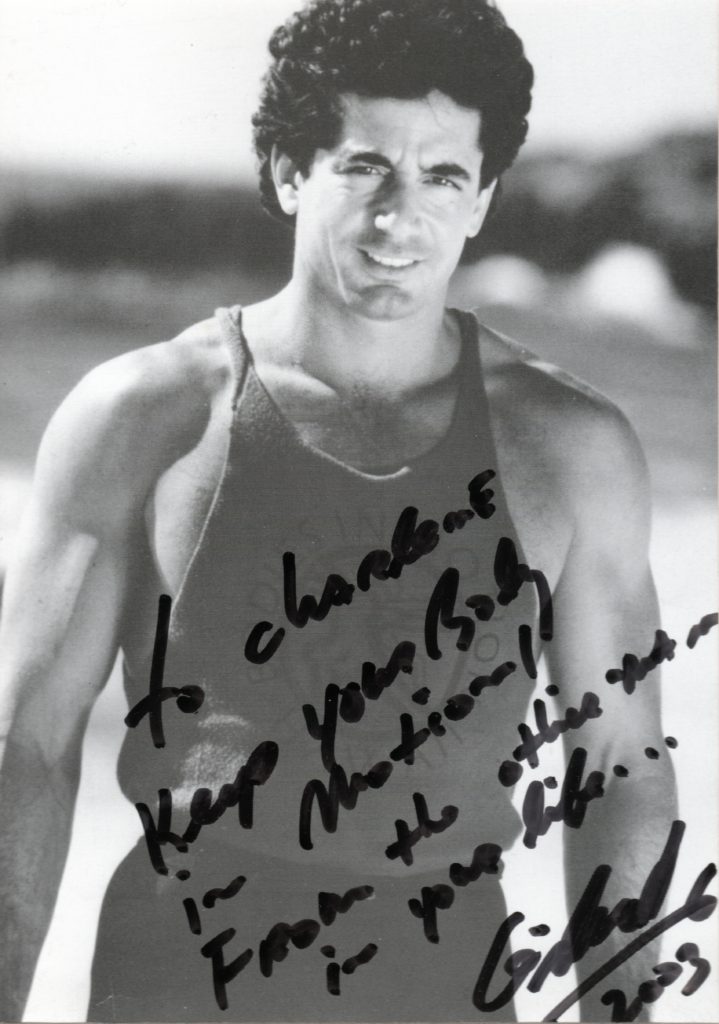 Gilad’s signed picture that hangs on my home gym wall!

The Bodies in Motion team sent me a Quick Fit Series DVD set and an autographed photo of Gilad that read, “Charlene, Keep your body in motion. From the other man in your life…Gilad”    I used Quick Fit so often over the years that I recently had to come to terms with the fact that I had worn them out.  I contacted Rob Hearn, the producer for Bodies in Motion with Gilad, and he graciously provided me with a new set.  While we were talking, he asked me if I was able to go to New York City for Gilad’s upcoming appearance at the ECA360 Fitness Conference.  He suggested that the promoters of the event would be interested in filming my long awaited, and much hoped for, meeting with Gilad.  While I initially wondered how I could possibly get away at the last minute with my obligations of work, caring for my elderly mother, and my three young sons’ busy schedules, the opportunity to cross off the bucket list item of meeting my fitness hero ultimately had me juggling things like a circus clown to make it all happen.  Fortunately for me, my fun, supportive and ‘always up for an adventure’ cousin is also a Gilad fan, so we packed up my smoking hot minivan and headed to The Big Apple! 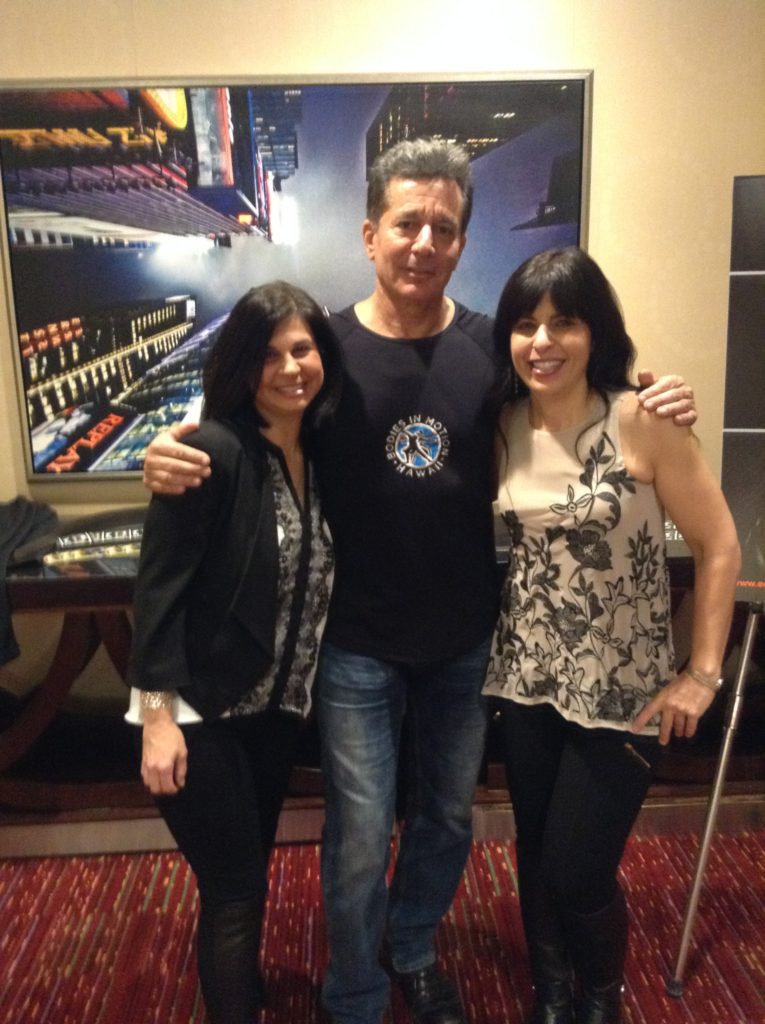 My cousin Brenda, Gilad and I at the ECA350 Fitness Conference

After my success story was featured in Good Housekeeping Magazine, mentioning that my weight loss was largely achieved through the use of home workout DVDs, I recall reading a message board entry that discussed my story written by fellow home workout enthusiasts that are affectionately known as “vidiots.”  I immediately knew I was one of them and, when you workout with video instructors on the TV in your home day after day, and pound after pound, they become like a dear friend.  I wasn’t sure what I would actually say to this man that I felt like I already knew, and owed so much to.

Much as I had always suspected, Gilad was delightful and it really did feel like meeting an old friend.  After the initial meeting, which was being filmed, we had a lot of time to talk.  Even though I had written to Gilad several times over the years, whenever my success stories were published and I gave him a shout out, I was stunned to learn that he had read those articles and knew all about my own FBJFit.com platform to inspire and encourage others who want to lose weight and get in shape. 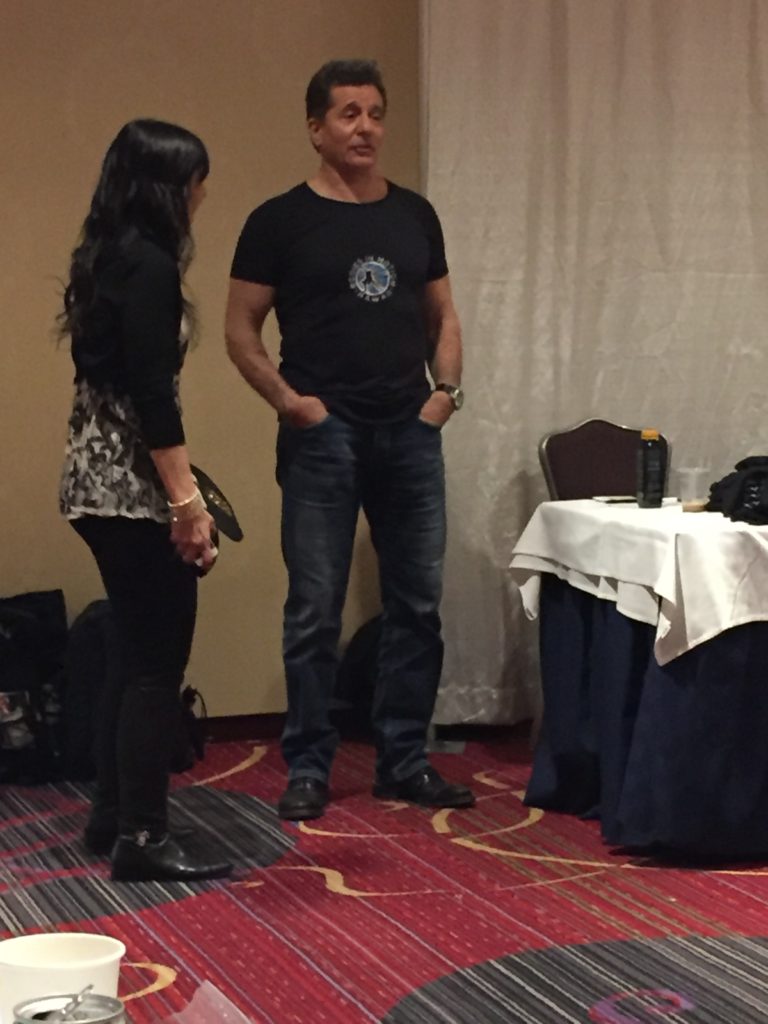 When a fitness legend talks, I listen!

What struck me most was Gilad’s reference to my passing on the fitness message to others. Without realizing it, I now try to be the positive force that helps moves others into motion; much like Gilad was to me.  Occasionally I see workout challenges on social media with someone practically balancing on a medicine ball and lifting a dumbbell while attempting an arabesque. Not only are these types of challenges potentially dangerous, they are not necessary to get into shape.  I think these images discourage people and shape how they feel about their own ability to begin and maintain a fitness regimen.  Gilad’s workouts presented me with a fun vibe and seemed totally doable when I was just starting out and yet continue to be an effective workout now that I’m at a more advanced fitness level.

Between our talks, I watched countless people come up and tell Gilad how much they loved him and how they have done his workouts over the years.  I met Mike Harrington, another Gilad enthusiast who had lost 200 lbs. and who also had begun his journey with Gilad’s workouts. Like myself, Mike uses his story to offer advice and encouragement to others who struggle with their weight. 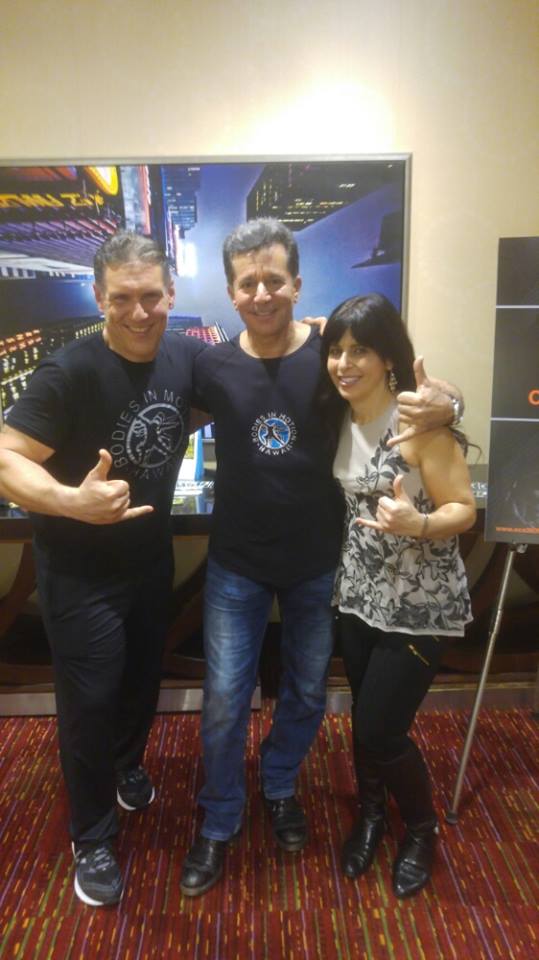 Near the end of my time at the conference, Gilad even took a moment to send a selfie video with me to a friend of mine who absolutely adores him, jokingly asking why she wasn’t with me.  I even got an official Bodies in Motion black T-shirt like they wear on the show.   I was giggling like a tween getting to have fun with the “cute one” in her favorite boy band. 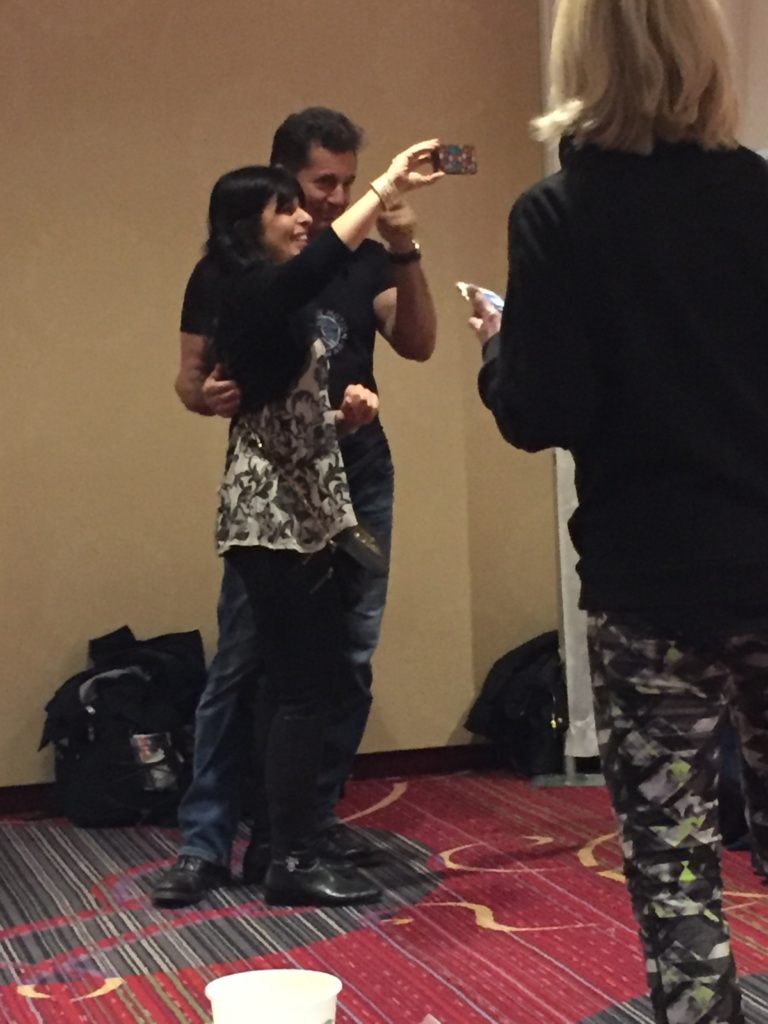 How do you begin to thank someone for having such charisma and passion for fitness that it literally jumps off the screen and touches the lives of the people who watch him?  Over the years I dreamed of one day meeting Gilad. Granted, in my fantasies, our meeting was in Hawaii, but it was still all I could have imagined.  I’m not sure he’ll ever really know the depth of my gratitude and how I truly plan to pay it forward. 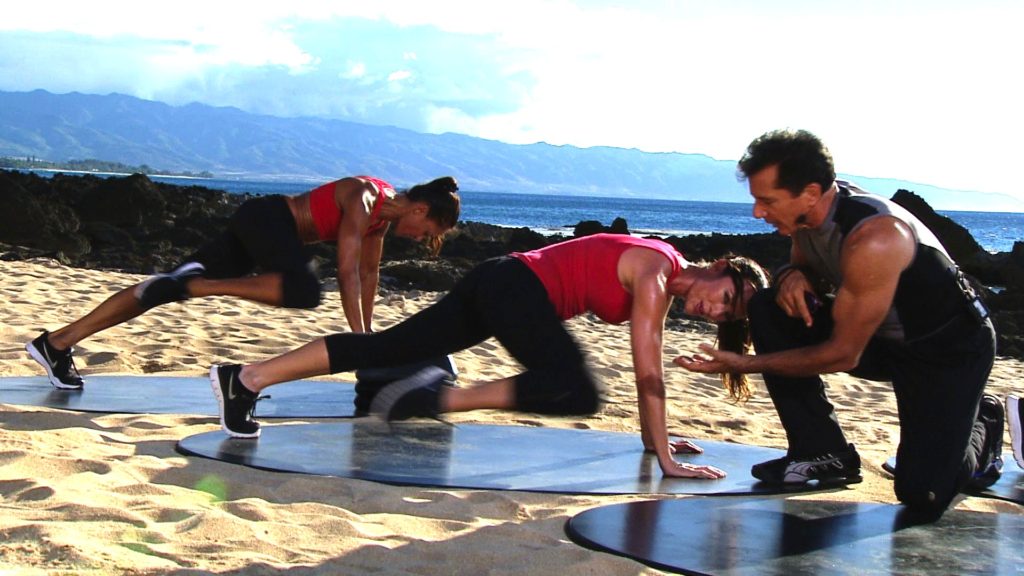 If you’re thinking of embarking on your own fitness adventure, and you are not sure where to start, you can check out Gilad’s workouts at www.gilad.tv    Who knows?  Maybe you’ll become a “vidiot” like me and we could end up doing one of the workouts on the beaches of Hawaii!  Until then, keep your body in motion!  Aloha! 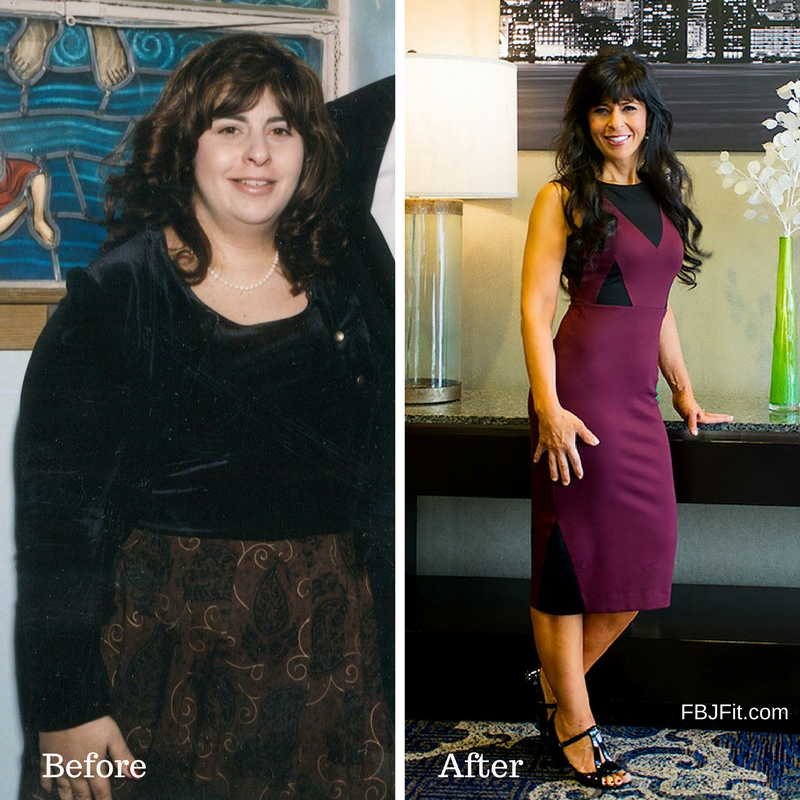 After Photo by Dana Lane Photography, Hair & Makeup by Janeen Jones & Dress by La Fille Colette on location at the Marriott Courtyard Woburn

Check out all of Gilad’s workouts through this special link: https://go.platformpurple.com/shop?e=fbjfit and enter FBJFIT off any order and get 25% off!!! *Disclosure:  This link is an affiliate link, meaning, at no additional cost to you, I may earn a commission if you click through and make a purchase.

*A very special thank you to Rob Hearn and ECA360 Fitness for making this all happen, and to my cousin Brenda for being the best adventure BFF a girl could ask for! 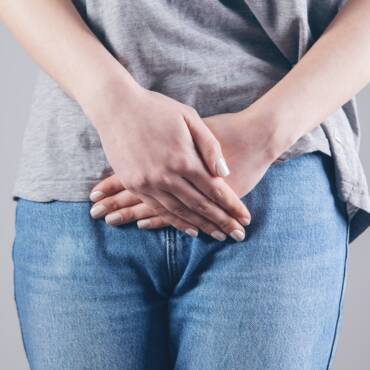 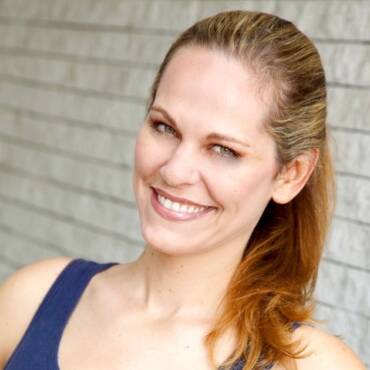 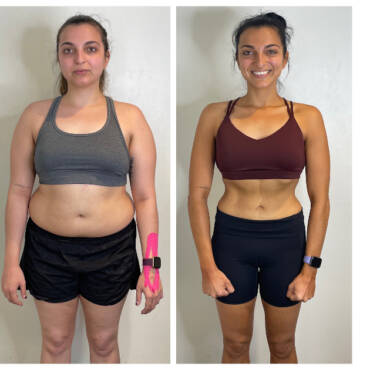 Singer and Actress Aylin Bayramoglu Shares How She lost 50 Pounds and Found Her Glee!